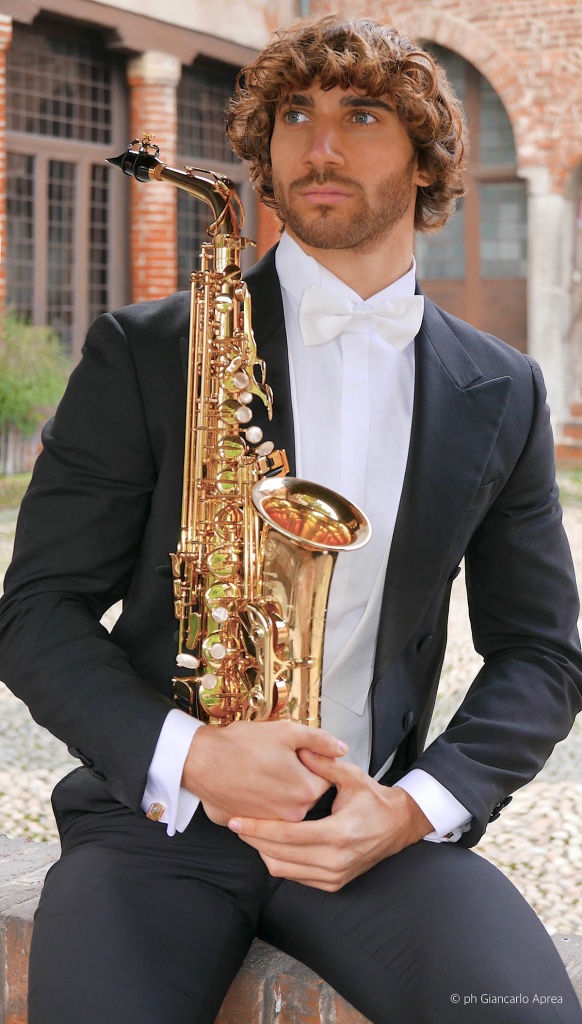 Born in Portoferraio (Isola d’Elba) in 1996, Jacopo Taddei received his degree at G. Verdi Conservatory in Milan, with Mario Marzi, last March. It follows his Master’s degree at G. Rossini Conservatory in Pesaro, with Federico Mondelci, in 2013.
In summer 2016 he obtained a scholarship at Boston Berklee College of Music, where he was selected to perform at Berklee Performance Center with the All Jazz Stars. The American success follows the first 20 prizes that Taddei has obtained between 2006 and 2016, in national and international competitions, including last year’s Elba Festival Prize.
Taddei performed with many orchestras, among which the Scala Philharmonic Orchestra, directed by Daniele Gatti, the Orchestra of Italian Conservatories, directed by Bruno Aprea, and the Orchestra de I Pomeriggi Musicali.
During the 2017 season he performed recitals for the Concerts Society at Giorgio Gaber Auditorium and the Filodrammatici Theatre in Milan, as well as the Roman Philharmonic Academy. He was invited to the Rossini Conservatory in Pesaro and in Fanano “Saxofollia Summer Camp” to hold masterclasses, and in June 2017 he was awarded the Medal of the Italian Chamber of Deputies by its President in Montecitorio – as a recognition of his talent.
He studied with, among others, Jean-Michel Goury, Francisco Martinez, Lars Mlekush and Anders Paulsson.
In 2019 Jacopo has been appointed first solo soprano saxophone chair of the Orchestra of the Teatro Regio in Turin. He has been conducted by celebrated conductors, such as Yury Bashmet, Antonio Pappano, Daniele Gatti, Yoichi Sugiyama, Daniel Smith, Bruno Aprea, Viktoriia Vitrenko, Francesco Gesualdi, William Barkhymer, Igor Dronov, Felix Korobov, Timothy Brock.
Taddei performs regularly at festivals for Les Jeunesses Musicales, Società Umanitaria, Festival Omaggio all’Umbria, Festival Elba Isola Musicale d’Europa, Amici della Musica di Padova.
Some of his concerts have been broadcast by the Italian National Channel RaiRadio3 and Radio Popolare.
During the past Seasons, remarkable concerts were his debut in New York City (opening concert of New York Chamber Music Festival), in Miami (Miami International Piano Festival Academy), in Hong Kong (Y Theatre) and a tournée in Argentina.
Season 2018/19 featured Jacopo as Artist in Residence for the Società dei Concerti in Milan; he also made his first appearance in the billboard of La Verdi Orchestra concert season at the Auditorium of Milan.
Performances with orchestra include, in 2020, concerts as soloist with the Nuremberger Symphoniker at the Milan Conservatory – Sala Verdi, and in Nuremberg.
Jacopo released his second CD produced by Concerto Classics and Skira, after the first one by Michelangeli Editore- Suonare News.
He is the dedicatee of music composed by Christian Lauba, Francesco Libetta and Alessandro Solbiati.