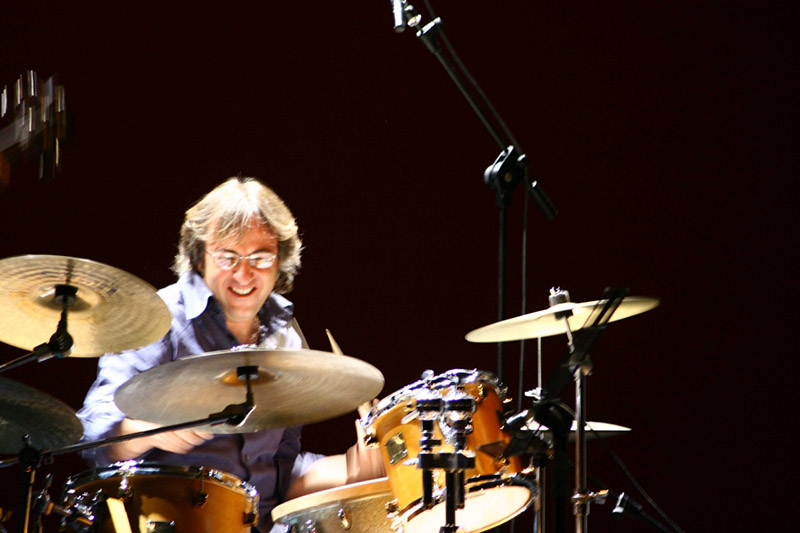 Self-taught, he has gained numerous experiences in the field of Jazz and Pop music and since 1984 his preferred field becomes Jazz.
In 1985 he participated in the creation of the Jazzerie group with Maurizio Quintavalle, Nico Stufano and Roberto Ottaviano on the soprano sax, making two records for Splas’ (h) records.
Beginning 1986 he has been part of the Mario Rosini Trio with Paolo Romano on electric bass.
In 1987, with the double bass player Maurizio Quintavalle, he constitutes the trio with the late pianist and friend, Davide Santorsola, recording five discs.
Since 1988 he has collaborated with the Pop group “Novecento” participating in various tours in Italy and productions with world-class guests such as: Billy Preston, Stanley Jordan, Eumir Deodato, Al Jarreau.
Since 2000 he has been part of the Con Alma trio with Guido Di Leone on the guitar and Vito Di Modugno on Hammond organ, recording two discs.
In 2007, together with the pianist Mario Rosini and the front-leader of the soul / funk group Dirotta su Cuba Simona Bencini, he formed the LmG Quartet completed by the alto sax Gaetano Partipilo and Luca Alemanno, double bass.
Subsequently, as leader he completes two recordings “… of course!” and “Acustronica”.
He collaborates with Pop music artists such as: Novecento, Ron, Billy Preston, Gregg Brown, Marco Armani, Michele Marmo, Tosca, Mario Rosini, Dirotta su Cuba, Rossana Casale, Lucio Dalla and the Magna Grecia Orchestra conducted by Maestro Beppe D’Onghia, Bari Metropolitan Symphony Orchestra, Symphony Orchestra of the Arturo Toscanini Foundation.
He created the “DrumStory”. One hundred years of drums in a single long solo, enclosed in an accurate chronological sequence of slides depicting drummers that marked the evolution of this instrument, starting from the “marching band” in the early years of the last century, up to today’s drummers.