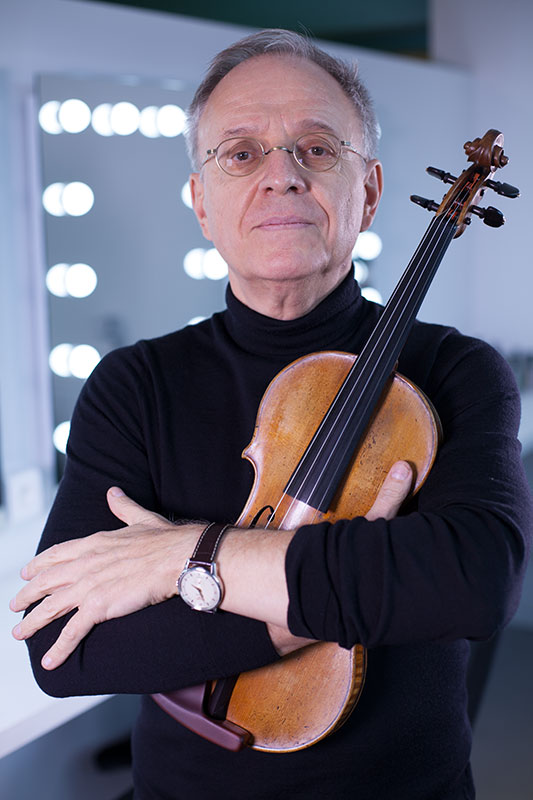 Boris Garlitsky received his first music lessons from his father, the author of the standart textbook for young violinists “STEP BY STEP”. He studied at the Moscow Conservatory under Prof. Yankelevich. After winning the Italian Paganini Competition in 1982, Boris Garlitsky toured as a Leader and Soloist with the “Moscow Virtuosi” ensemble. He moved to France and since then has performed as a Soloist with the London Philharmonic Orchestra, the Vienna Radio Orchestra, the Chamber Orchestra of Philadelphia and the Orchestra of the Age of Enlightenment, among others. His interpretation of Schostakovich’s violin concerto “was worthy of the work’s first interpreter, David Oistrakh” (the LION FIGARO commented). Mr.Garlitsky has performed at the most prestigious concert halls, such as Musikverein in Vienna, the Every Ficher Hall in New York, the Tchaikovsky Hall in Moscow and has recorded for RCA, Naxos, Chandos, and Polymnie.
Leader of the London Philharmonic Orchestra since 2003, Boris Garlitsky has made guest appearances as a Leader of many major orchestras including the LSO, the Royal Opera House, the RPO, Vienna Radio Orchestra and Baltimore Symphony Orchestra.
“An extremely lively musician of high intelligence and flexibility (…), Mr Garlitsky measures up to every Concert Master of the world’s top orchestras, such as New York, Vienna, Berlin etc., and can play an outstanding role in all leading international orchestras” (KURT MAZUR).
“His charisma is glaringly obovious. And how! A first violin of such imposing presence is a blessing for any ensemble” (journal LE SOIR).
As a chamber musician Garlitsky has collaborated with Pinchas Zuckerman, Martha Argerich, Truls Mork, Maria-Joao Pires and many others. His String Trio “Hermitage“ was “true brilliance! … undoubtedly one of finest of its type” (journal STRAD).
Professor at the Conservatoire National Supérieur de Paris and the Folkwang Universität der Künste, Essen (Germany), Mr Garlitsky offers master classes at the most renowned music institutions, including the Curtis Institute in Philadelphia, the Peabody Conservatory in Baltimore and also the Royal Academy oe Music in London, Hanns Eisler Musikhochschule in Berlin and Kronberg Academy.